Homesteading In The Pacific Northwest

No Harvest Monday ... and Greenhouse Raising!

I have no harvest to report this week. Some of my Asian Greens are almost harvestable but I'd like to give them another week to size up a bit. I'm joining other bloggers over at Daphne's Dandelions as we share our weekly harvests...it's fun to see what others are harvesting and what they are cooking up with it...check it out!


It's time to show you the progress on the greenhouse and tell you how it happened :)  Mike and I settled into a tradition early in our relationship.  When it came time for all the "gift giving' occasions (birthday, Christmas, anniversary, Valentine's et.al. ) we decided that instead of trying to figure out what to give each other (given that we were in our 50's when we met and each had more "stuff" than we really needed) we would give each other a "gift certificate" that could be redeemed any time during the year for something that was really wanted.  Some years we have gone without redeeming them since there was nothing that was really wanted or needed.  This year Mike redeemed his for a compressor to fill our scuba tanks.  I redeemed mine for a greenhouse :)

I looked at several styles and brands of greenhouses and let FitzGyver have a lot of input with regards to energy efficiency, ease of construction etc. and we decided on a Sunglo greenhouse manufactured here in Washington and sold by Costco (and on sale for $400 dollars off that month! :)  We started construction about 3 weeks ago and I thought it would be fun to show you the process .... 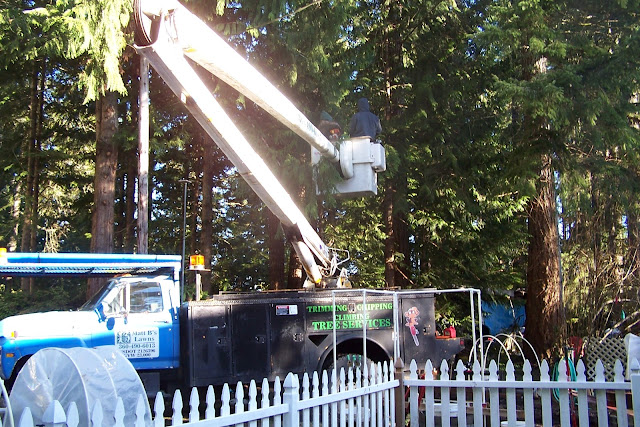 First we had a local landscape company trim the limbs from several trees to give the
greenhouse area more light ... 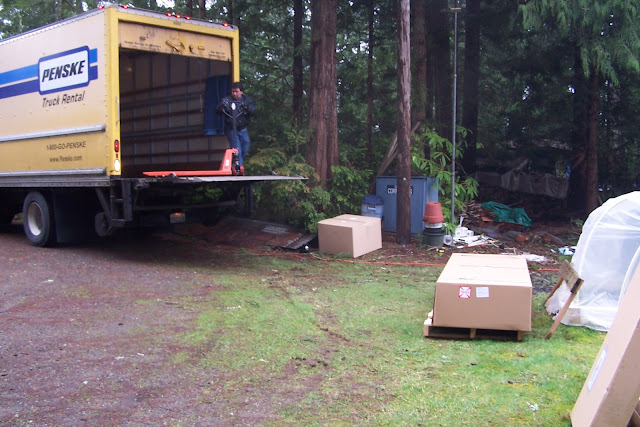 ... the greenhouse arrives in several BIG boxes.  As FitzGyver put it "What Costco doesn't tell you is that there are 251 parts that need to be assembled with 330 long and short rivets PLUS the foundation, utilities and ancillarily equipment for growing plants!!! But that said, it goes together fairly easily for a handy mechanical engineer! And the rain showers are helping because I get one thing done and then have to come in to watch the DVD or read the directions for the next step... " 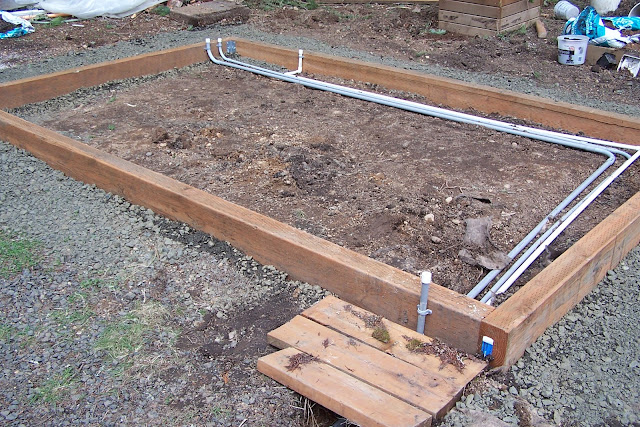 The foundation with water and power lines ... 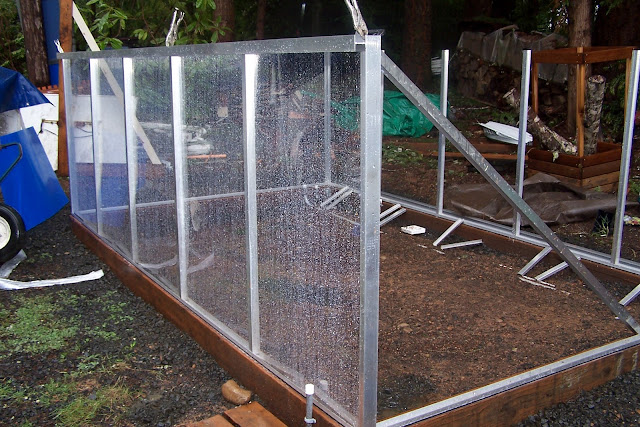 The bottom railings and first side goes up ... (You can see that it is wet ... FitzGyver wasn't kidding about working between rain showers!) 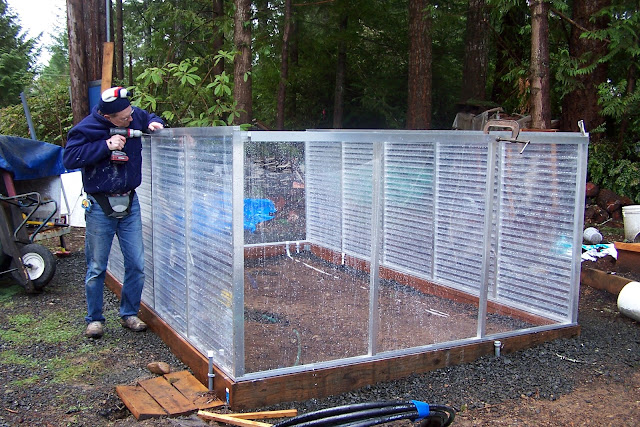 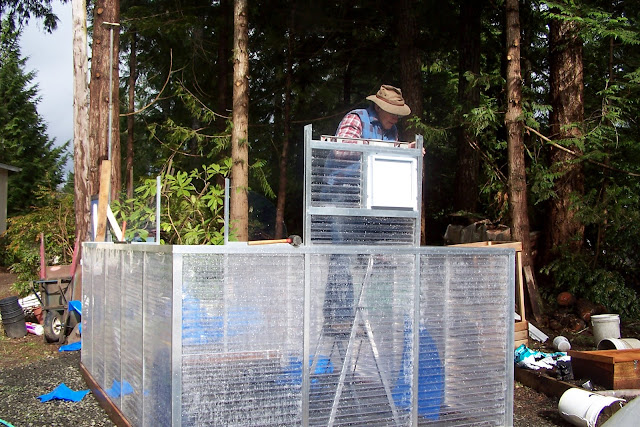 Starting on the top section ... Yes!  The sun finally came out to play! 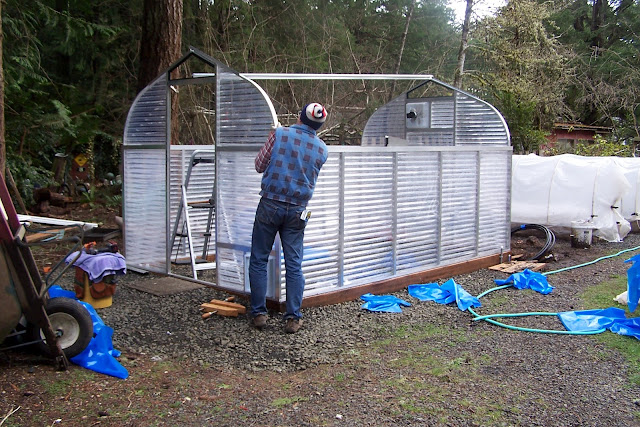 Getting ready to start on the roof ... the blue plastic pieces all over the place were protective coverings on the plexiglass sheets. 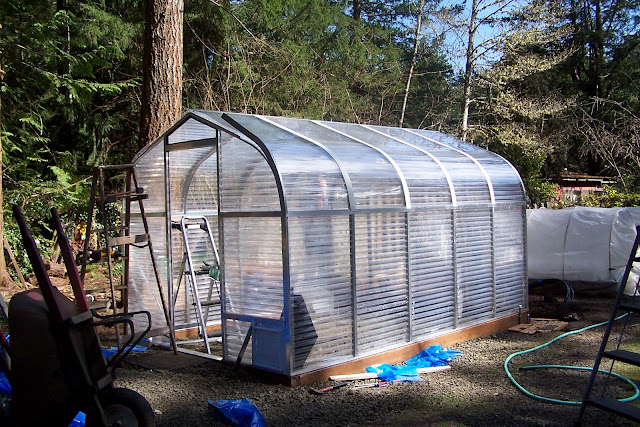 The roof is on! 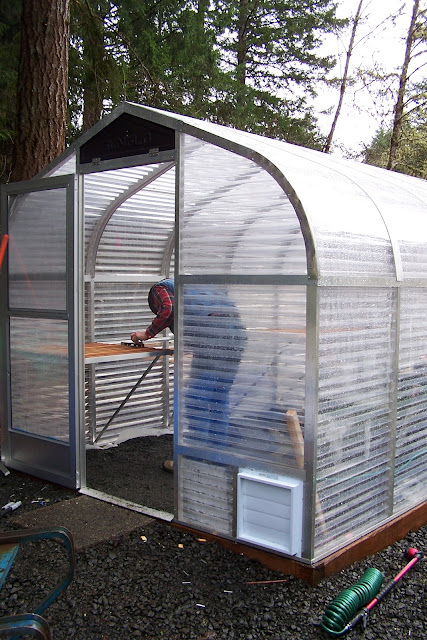 The cedar shelves go in ... 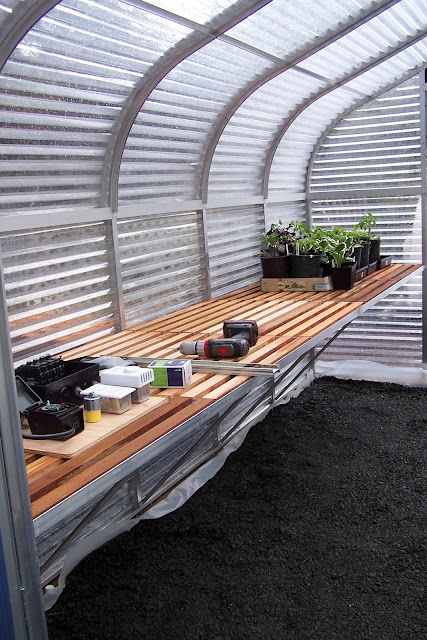 ... and the first plants settle into their new home :) 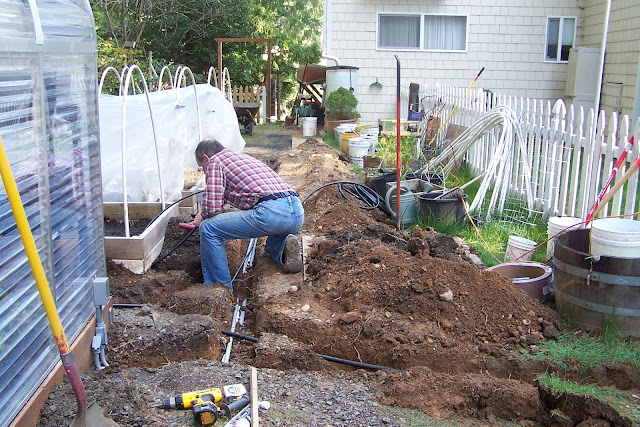 The fourth raised bed goes into position and trenches are dug for a power line to the greenhouse and water lines to the raised beds ... FitzGyver said I need steel toed boots and a hard hat if I wanted to enter the construction zone! 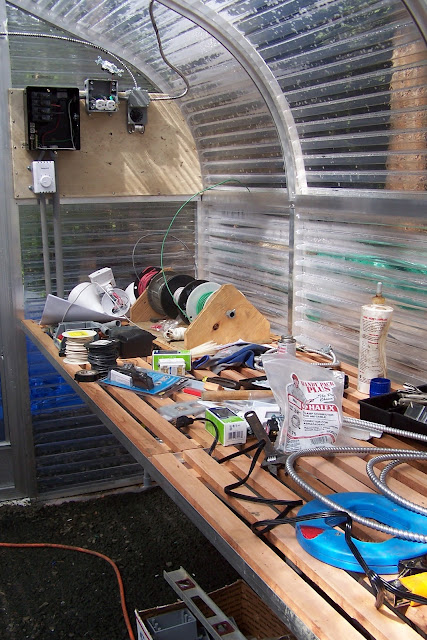 There's still some work to be done on the electrical panel.  The greenhouse came with controllers for the fan and vent, temperature and a timer for the lights! 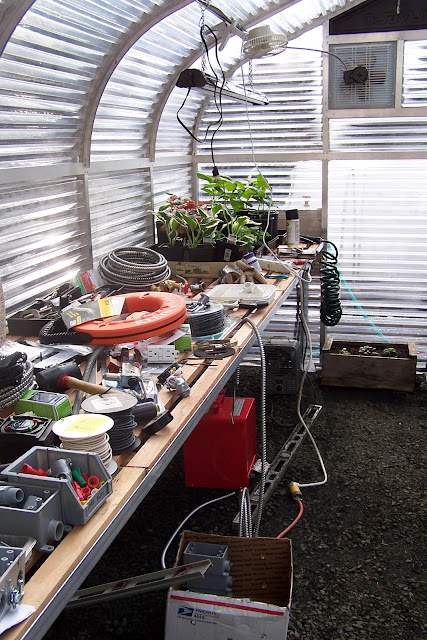 At this point in time one half of the greenhouse is still FitzGyver's ... 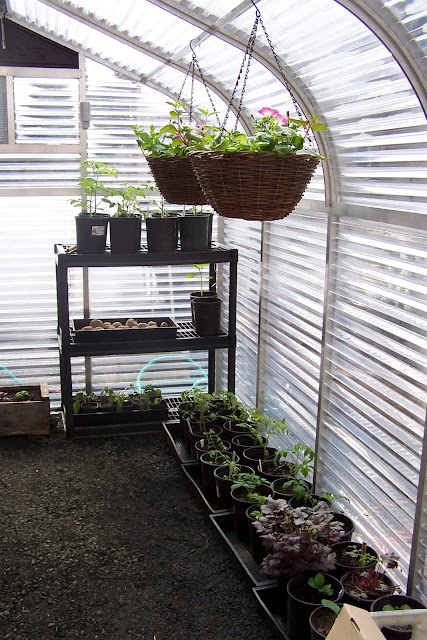 ... and the other half is mine!  Mike says he should be done with the electrical work sometime this week ... I'll keep you posted on the "Grand Opening" celebration :)

Print Friendly
Posted by Deb at 9:30 AM 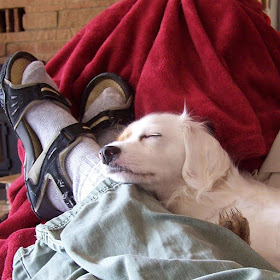 "When the lights go off, the stores close-up, the politicians go quiet, and the world as we know it ends, I’ll be in the garden. Grab a hoe and come along. Make whiskey from an old copper still, pick fruit from trees you nursed, pull a weed, can tomatoes on a wood stove, smoke a venison loin, light a pipe, sit down against a tree trunk and we’ll talk about literature and the stars. There’ll be plenty of room. And about that other thing. What is it you kids call it? …multitasking? Yeah, that’s it, multitasking. …there’ll be none of that shit." (author unknown)